How to Drive Through a Flooded Area

Avoid driving through a flood if at all possible. Careful driving will lessen the risk if there's no other way. 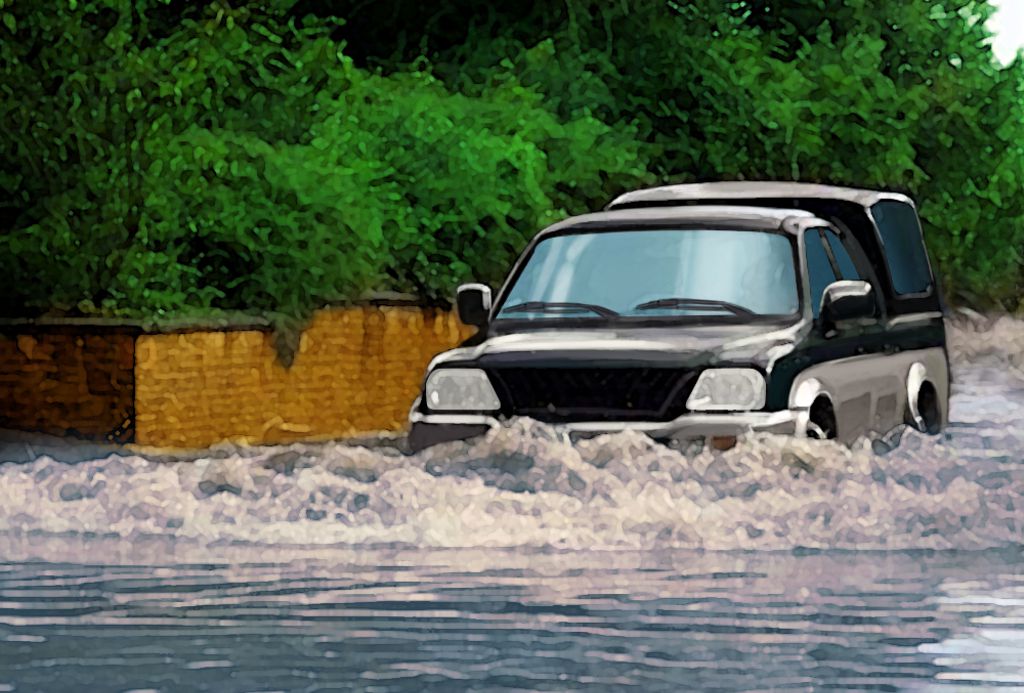 Heavy rain and flooded roads unfortunately come with the territory of driving in many parts of the U.S. While rain by itself can reduce visibility and cause handling issues, a flooded area can make quick work of your vehicle. People often underestimate how little water it takes to immobilize their car: six inches of standing water may be enough to stall your engine, while a current as low as four inches deep may take you along for the ride.

Even in milder cases, there is still a significant potential for danger. It’s recommended you avoid these flooded sections whenever possible. However, if there’s no getting around it, taking extra precautions and driving carefully should be enough to see you through to the other side. In this article, Part 1 explains to assess a flooded area, Part 2 describes how to drive through a flooded area, and Part 3 advises what to do in case of an emergency.

Part 1 of 3: How to gauge the prospects of a flooded zone: should you risk it?

Provided there is sufficient visibility of the ground, it should be clear whether a patch of road is submerged or not. While the vast majority of these cases usually amounts to puddles and very minor flooding, even these small cases can prove dangerous if a driver doesn’t adjust their driving accordingly.

As a basic rule, you should re-plan your route around the flooding if the water is deep enough that you can’t see the bottom. If this happens to be the case, is there an alternative route you can take?

Pay attention to warning signs, barricades and posts before the flooded road. If the area is sufficiently populated and active, there may be signs to give drivers instructions already.

If you’re looking to gauge the depth and risk of the flooding itself and aren’t sure, you may want to wait for other cars to make the passage. When a car passes through, you’ll be able to see how it affects the vehicle and verify whether it’s a hazard or not.

If you’re on your own, it may help to stop the car, get out, and gauge the depth using a stick or the end of an umbrella. If it’s raining and the water is murky, it may be impossible to figure out the depth with eyes alone.

If the flooding is potentially hazardous, your choice of vehicle will matter a lot. A Land Rover or truck with high-suspension will have a far easier time of successfully navigating the flooded space than a compact sedan.

In addition, it’s important to consider your insurance in the case of a failure. A stronger policy will shave off some of the risk going into it; contrarily, you’ll want to be more hesitant if repairs or trouble would incur significant personal costs.

Part 2 of 3: If you do drive through a flooded area, do it slowly and carefully

Turn off your air conditioning before moving into the flooded space. This will keep water from being inadvertently sucked into the engine compartment and stalling the car.

When you drive through, be slow and steady with your movement, and don’t stop until you’re completely through the hazard. Especially in the case if the water is running in a certain direction, steering will be difficult. Hydroplaning will affect your vehicle’s handling, and it’s especially important to give yourself the extra time to adjust to it, especially if you’re not familiar with the experience yet.

If there’s any fear of failure, you may feel pressed to get through the flooding as quickly as possible. However, going faster increases the risk of losing traction. Driving faster can also create a splash effect, which could be distracting to other drivers braving it in the opposite direction. And in the case of heavy rain, using headlights and fog lamps should help with issues with visibility.

Part 3 of 3: Stay calm and act accordingly in the case of an emergency

Even if you have a large vehicle, it does not take much depth or a strong current for things to go sour fast. In the event that you do get stuck in a flooded area, stay inside the vehicle and call for proper help.

Trying to get the car out yourself once it has stalled only risks causing more damage. Don’t open up the hood to try and fix anything; the engine compartment does not need a lot of exposure to water to get wrecked.

If the water levels are rising and you need to escape, the car doors may be impossible to open. If this is the case, roll down or smash the windows and pull yourself and other passengers out as such. Help is available and making sure you’re properly insured in advance will take a major edge off of flooded roads and other hazards.

How to Escape From a Car in Water